As part of the IBM Patterns Design Education internship program, I spent 8 weeks working with the IBM Cloud product team, along with a group of 2 front-end developers and 1 other UX designer to research, design, and test a mobile solution that empowers IBM Cloud subject matter experts to collaborate with IBM Cloud users for live problem-solving via a mobile optimization of IBM's DeveloperWorks help forum. During this process, I conducted stakeholder interviews, collaborated to design the user flow of our mobile solution, designed the high-fidelity prototypes, and conducted iterative user testing of our solution via the IBM Design Thinking framework. Our 2-month journey culminated in the delivery of our solution and prototype in a studio-wide presentation to IBM Studios Austin and the IBM Cloud product team.
Time Frame
June-August 2018
SKILLS UTILIZED
UI/UX design, visual design, UX research, prototyping, stakeholder collaboration
THE CHALLENGE:
The lack of a centralized source community-driven help resource for IBM Cloud users/developers makes troubleshooting tedious and time-consuming for developers who run into technical issues and don't know where to turn for advice.
THE SOLUTION:
A mobile optimization of IBM's Developerworks help forum that centralizes community-based help on one mobile platform, enabling IBM Cloud developers to communicate and help with each others' technical questions in real time and empowering faster problem resolution between users.

i. Research
To gain a more thorough understanding of the issues faced by users across the IBM Cloud ecosystem, I conducted user interviews among a wide variety of roles and shadowed developers working with IBM Cloud to get a better first-hand experience of what they were struggling with.

Our research revealed that the work of a Cloud programmer can often be long and tedious: development work that is already complex and difficult by nature is compounded the moment the developer runs into a bug in their code. This discovery often launches a time-consuming, multi-step process by which the developer Googles their error and searches numerous help forums for the solution.
For developers working on IBM Cloud’s platform, this process can be especially tedious: Google turns them towards resources like StackOverflow and IBM’s product-specific forum DeveloperWorks, but often those sites aren’t active enough to provide an answer to their IBM Cloud questions. For many, this troubleshooting process eventually ends at Cloud support, where developers submit tickets they can often wait long weeks to resolve. This boils down to these main pain points and challenges:
1. Cloud developers struggle to find the solution to their problems on ibm's cloud help forum, developerworks, making troubleshooting time-consuming and tedious as they search through many resources and wait on answers to questions they submit.
2. existing solutions are scattered across Slack channels and other non-archivable, non-googlable resources, making them difficult to discover for developers in need.

But why weren't developers able to find solutions on existing resources like Developerworks?
In our search for the answer, we uncovered a subset of IBM Cloud users with the answers to other Cloud developers’ issues and questions: IBM Cloud subject matter experts who AREN'T part of the IBM Cloud Support team, who volunteer time out of their busy days to help other IBM Cloud users and upskill their own IBM Cloud expertise in the process. These users were dubbed by us in our research as "power helpers," and from our research we were able to synthesize a user persona summarizing their roles, priorities, and challenges.

Using mobile messaging platforms like Slack, power helpers engage in quick message exchanges and dialogues with others to solve the IBM Cloud question at hand. But they can only put aside a small part of their free time from their own full-time jobs to help others in this way -- time that’s often spent on their commute, meal breaks, or even leisure.
However, because of their already busy lifestyles, power helpers couldn't fit non-mobile sites such as DeveloperWorks or StackOverflow into their existing help workflow. As a result, the resources that IBM Cloud developers frequently turned to for help aren’t populated by these fellow developers and their expertise, forcing them to continue on their frustrating troubleshooting journey.
We realized that this posed an unfulfilled user need that could be met using a mobile solution:
a mobile optimization of ibm's developerworks help forum will enable power users and other IBm cloud developers to communicate and answer each others' questions quickly and efficiently, removing the friction involved with accessing, helping, and receiving help from the developer community.
This solution merges the communication workflows of both on-the-go "power helpers" and computer-bound developers in need of help to empower real-time communication and problem-solving, and archives the problems and solutions on the developerworks forum for future reference by others encountering the same problems.
ii. prototyping
We developed a key scenario for Eve, our power user persona, to determine the key enablements we wanted our app to give our users: instant notification of new questions relevant to their expertise, quick and easy communication to solve the problem, and active engagement in an IBM Cloud developer community that fits into their busy lifestyles.

Based on the needs of the power users we were designing for, we determined the core features of our solution:
1. Tag-following functionality notifies users of new questions posted in their area of expertise/interest.
2. Question details displayed in conjunction with the messaging interface to allow users to move from notification to communication in as few steps as possible.
3. A "highlight/mark as answer suggestion" feature for each message discerns actionable solution suggestions to the original problem from clarifying questions/dialogue,
4. An "accept answer" feature that allows the original question poster to verify a suggestion as the true solution and changes the question page to clearly visually indicate a verified answer.
We then moved to formulating a user flow that allowed users to move from question notification to question discussion and resolution quickly and efficiently.

Through paper prototype and wireframe testing, we were able to get valuable feedback on accessibility, clarity of information, and usability of the chat/question information function. 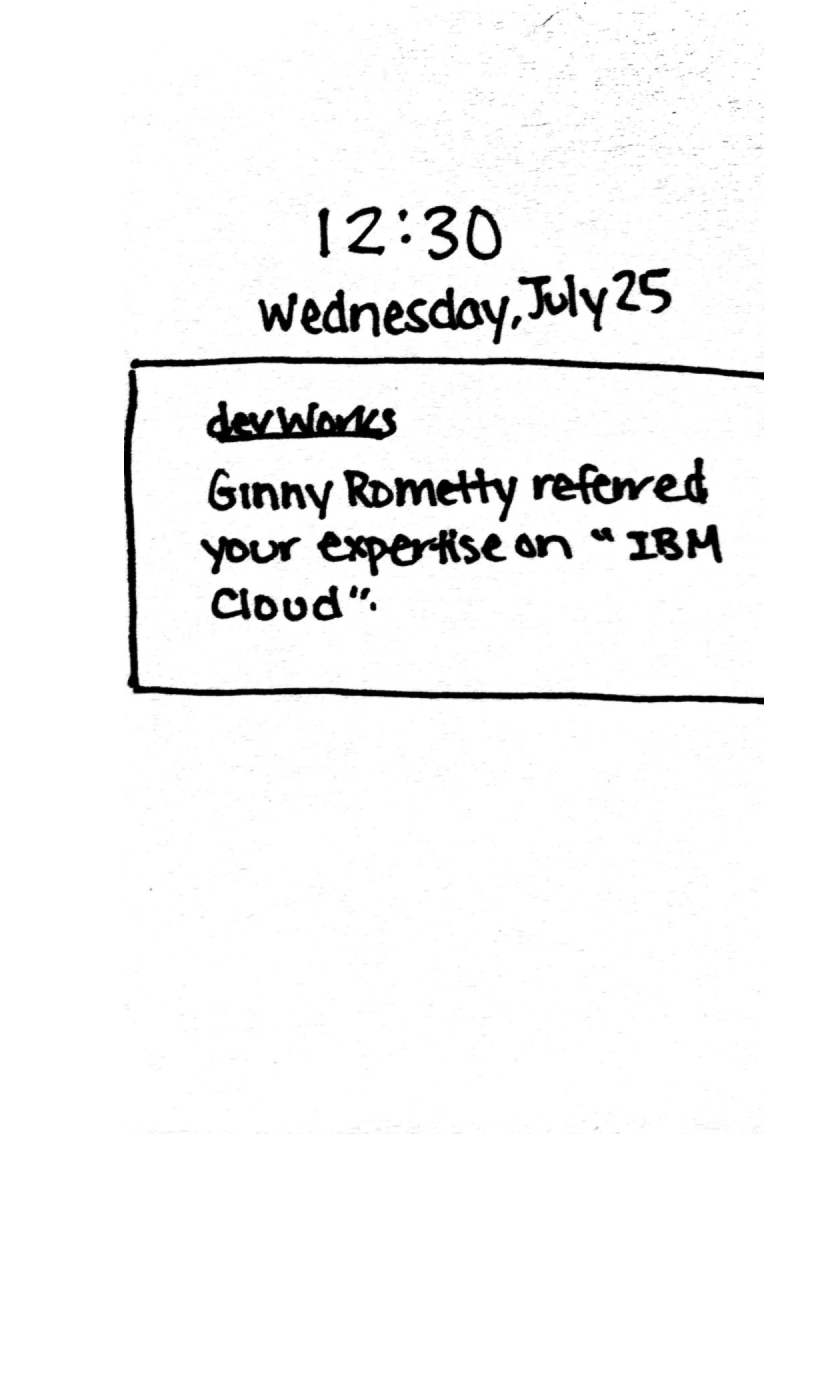 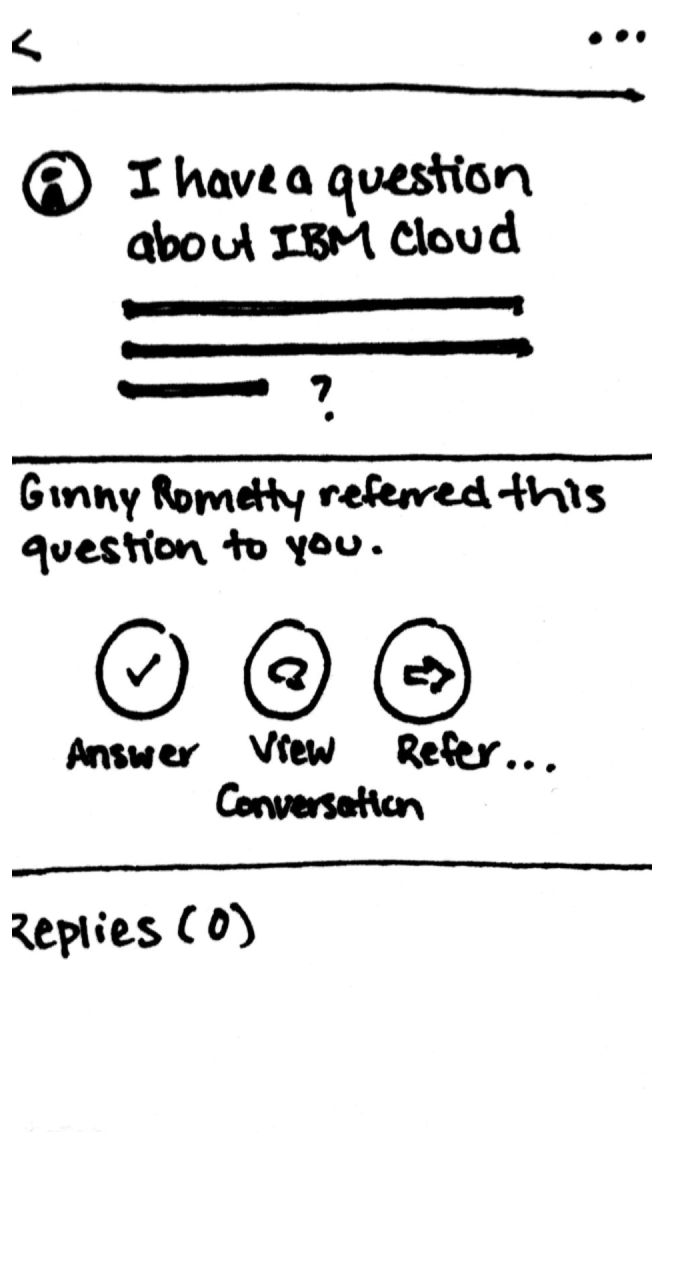 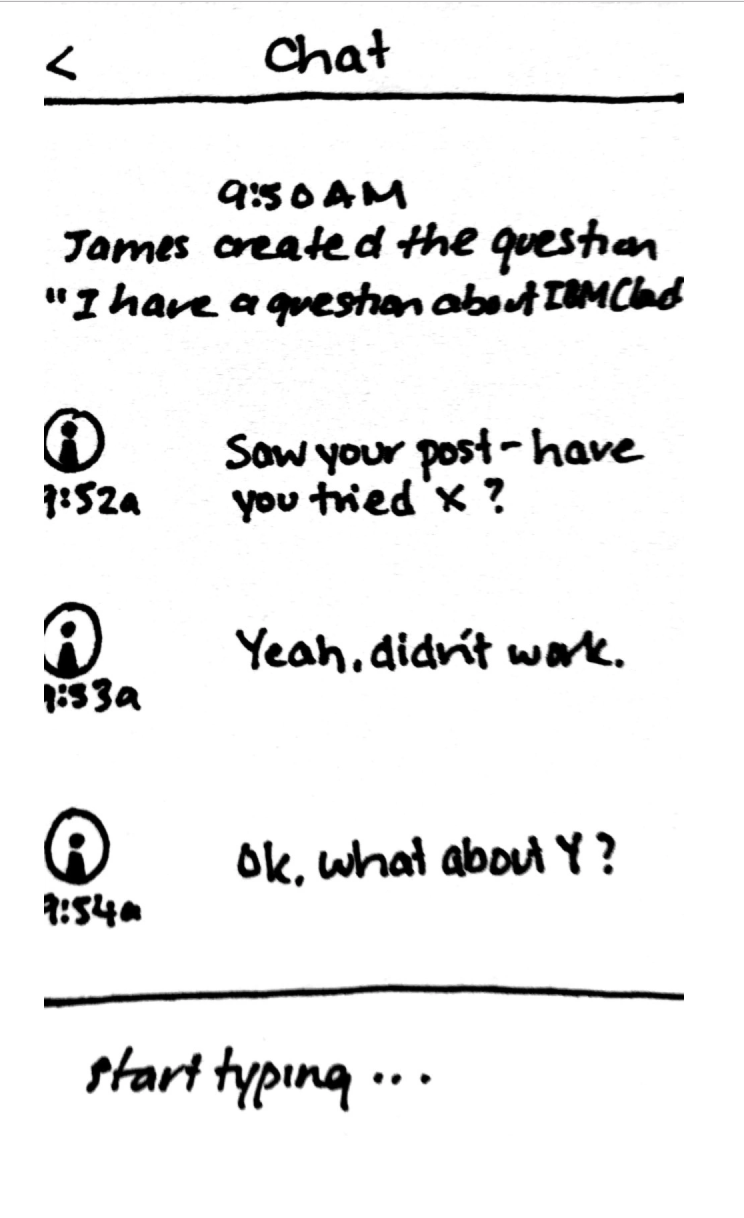 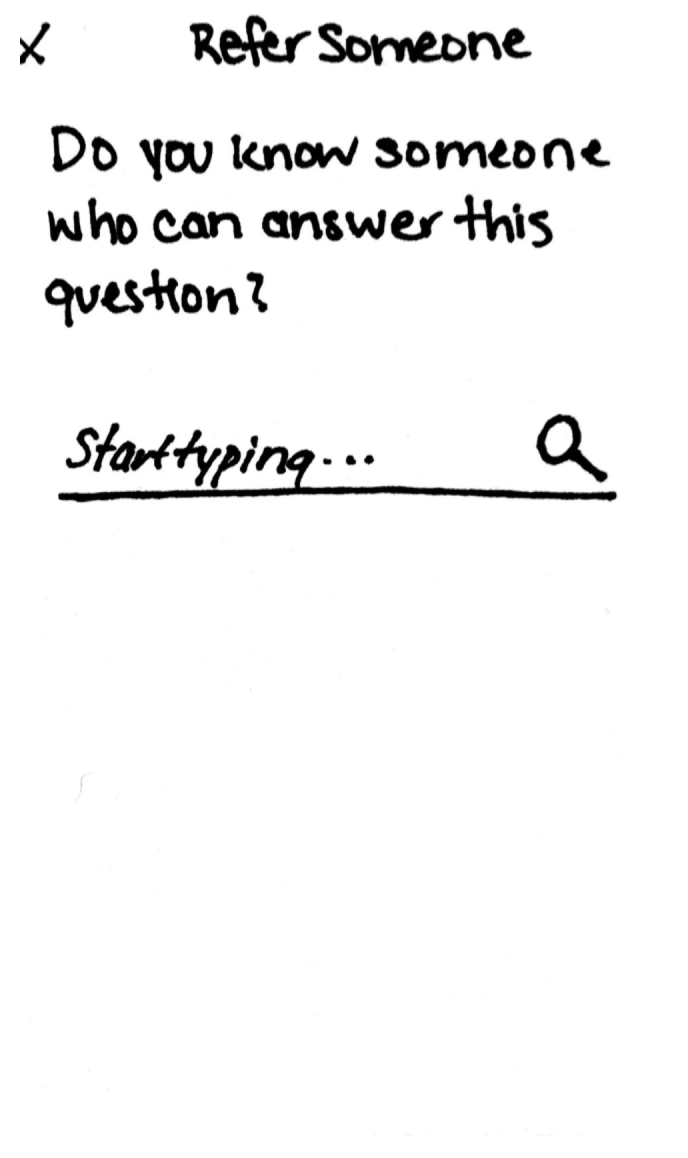 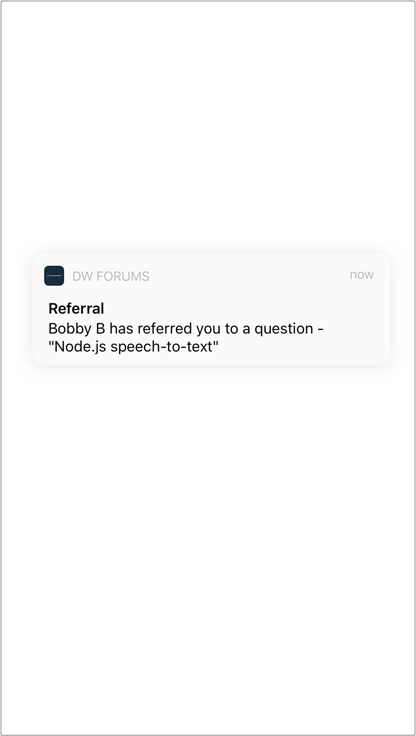 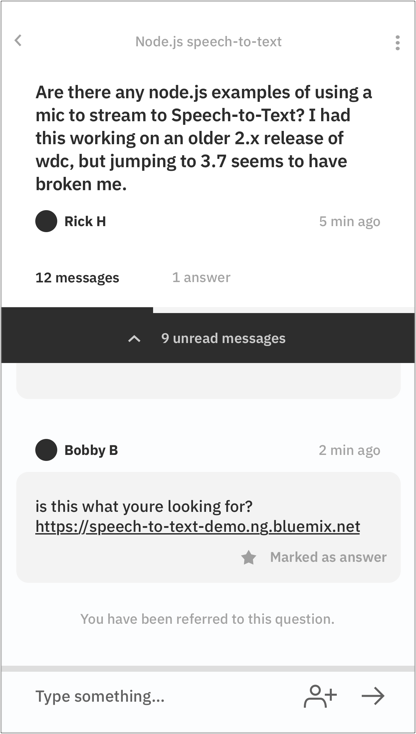 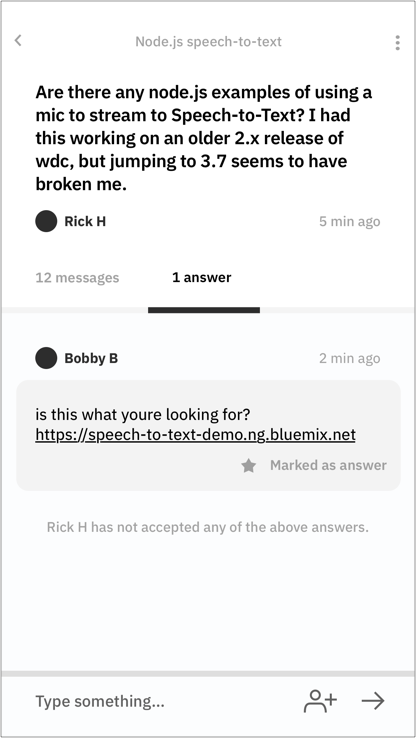 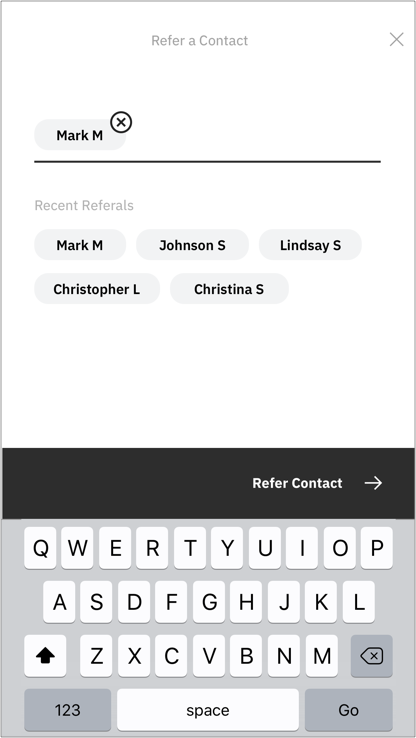 Mobile Prototype Link
User testing with our prototypes provided valuable information for improving the usability and efficiency of our prototype UX. We also received positive feedback in our interviews: power helpers believed the mobile solution would help them ultimately streamline and maximize the efficiency of their existing processes helping IBM Cloud users, without taking extra time out of their day.

Ultimate user outcomes
1. Empower Cloud subject matter experts to provide Cloud developers with either an answer or a recommended resource to the Cloud developers’ questions within minutes of posting
2. Allow power users to upskill their IBM Cloud knowledge at a greater pace through addressing more problems in their areas of expertise without having to set aside extra time to do so.
Reflections and next steps
At the end of 8 weeks, our team pitched our solution to IBM Design studios Austin and the IBM Cloud product team.
The degree of success of our product would be measured by the following key performance indicators:
1. Decreased DeveloperWorks question resolve time
2. Decreased IBM Support ticket costs
3. Increased DeveloperWorks user count and engagement
This project was a fascinating deep-dive into IBM's Enterprise Design Thinking framework; IBM gave my team full freedom to pursue a user problem we chose from our own research, which taught me to build a more solid user-centered case surrounding my design decisions. This project served as a unique opportunity for me to build my research and UX skills on a much wider scale, but to also sharpen my UX and visual design decisions using business strategy-driven insights and motivations.
Moving forward, I'd like to continue improving my application of business-oriented goals and strategy to my designs, as well as to implement analytics tools into the fully built-out product to continue iteration and improvement based off longer-term data. I'd also like to continue exploring and testing ways to make viewing and collaborating on Developerworks questions more frictionless in mobile -- including designing better ways to view code snippets and keep track of questions each user is involved with.